There is one place that takes your breath away and that attracts visitors from different parts of the world with its mystical spirit and its colors. Libellule recently wrote that Turkey is one of the top travel destinations in November (see post Top 5 destinations to travel in November), but not only is its capital magical but also a place in the interior, which is a blend of the ancient and the modern.

Cappadocia is an unreal complex and a unique wonder of nature that irresistibly reminds of the land of Flintstones. This is due to the fairy chimneys, rocks of strange shapes, formed about 30 million years ago after the eruptions of once active volcanoes, whose activity stopped at the beginning of the Neolithic.

But what is especially attractive and what Cappadocia is famous for are its balloons, which, when hundreds are released into the sky, paint the sky with the most beautiful colors.

The most impressive are the fairy chimneys, mushroom and cone structures made of sedimentary stone with caps on top that emerge from the sand-covered soil of Cappadocia. In these rocks, the ancient Christians carved their churches so that Cappadocia is a tourist paradise with over 3000 temples, mostly Orthodox.

Goreme is a small village located among fairy chimneys, about ten minutes drive from Nevsehir. The Goreme is an open-Air Museum has located about 2 km from the village and consists of a series of fairy chimneys in which Byzantine churches, chapels, and monasteries are carved. Due to its great cultural and historical significance, the area is protected as a UNESCO World Heritage Site.

The greatest value of these churches is their frescoes, which connoisseurs classify as the most beautiful works of early Christian art. Some frescoes are well preserved but, unfortunately, under the influence of erosion, most of them are damaged to a greater or lesser extent. The most famous and largest church is Tokali Kilise (Button), which contains frescoes from the 9th and 11th centuries, mostly with depictions from the life of Christ.

Many of the rooms recessed in the rocks of Goreme where people once lived have today been adapted to tourism and converted into accommodation facilities. Although due to the stone environment, this unusual type of accommodation seems uncomfortable at first glance, you are wrong, because such pensions and hotels in the rocks offer superior comfort and excellent food.

Cappadocia is full of contrasts, so in addition to enjoying the unusual nature and ancient historical monuments, you will also be able to find places to spend time.

Urgup is the tourist center of Cappadocia, with an excellent choice of accommodation offered by charming hotels carved into the rocks, numerous shops, cafes, restaurants, and nightlife until dawn. Be sure to try the top quality homemade wine. There is also Temeni hill, whose lookout puts the whole of Urgup in the palm of your hand and offers a breathtaking view.

Also, there is Avanos, a city that is a great option for rafting and horseback riding lovers, and has been known for centuries for pottery and handmade ceramic items, so if you want souvenirs from Cappadocia, buy them here.

There are no reliable and reliable data on its origin, but it is assumed that it was first founded in the 8th or 7th century BC. So far, 8 floors have been explored, up to a total depth of 85 meters, and the lowest three floors are still being explored. Only the first two levels are available for tourists to tour.

It is estimated that Derinkuyu had between 25 and 50 thousand inhabitants, it had a ventilation system, a water supply system, a school, a church, bedrooms, kitchens, toilets, and many other rooms that enabled the normal life of the inhabitants underground.

What will surely leave the biggest impression on you is riding colorful balloonson hot air. There are 20 to 268 people in them, and when dozens of colorful balloons soar into the blue sky in the morning with the first rays of the sun, the scene looks really unreal. Nothing is less unreal in the early evening hours.

The feeling of observing this wondrous array of natural actions and human hands from a bird’s eye view as the sun rises and colors the sky with its rays in magical shades cannot be described in words.

The organizers give breakfast before the summer at the gathering place. The price is different, and the level of service depends on the price. The base price is $ 100 per person. Includes transfer from the hotel, pastries and coffee, and a place in the balloon basket that holds max. 28 people.

The flight takes about 45 minutes and balloons climb to a height of about 600 meters. The higher the price, the richer the service. Other options include bicycle rental, quad biking, horse, or camel riding.

To spice up this magnificent trip, like icing on a cake, Libellule recommend to you a hotel Tourist & Resort Cappadocia, which is located on the road to Goreme It is about 1 km from the center of Goreme and only 300m from the bus station.

To afford complete enjoyment of Cappadocia, we recommend that you immediately book Tourist & Resort Cappadocia, just by simply clicking on the image below. 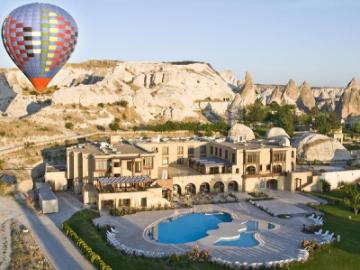 Also, you can book this hotel or another amazing hotel you like easily and fast via our form and enjoy the colorful heaven of Cappadocia!

No matter how often you travel and how many famous destinations you have visited so far, a tour of Cappadocia will undoubtedly be one of your most memorable travel experiences.

Important notice: before taking this trip, first inform yourself about the conditions related to the current situation.

If you have ever visited this magical place or ridden balloons, write your experience in the comment below.